To continue building upon OCF’s security framework, the recently completed OCF 2.2.1 specification now includes new support for end-to-end encryption leveraging open (IETF) standards. This encryption works to prevent third parties from accessing data while it’s transferred from one end system or device to another. With this update, IoT device users can be confident that the data sent through their OCF devices is protected and private.

With an increasing number of people confined to their homes, the year 2020 has shed light on the utmost importance of simple, secure IoT technology. This year, OCF has made numerous updates to its specifications, with a common goal to make IoT manufacturers’ product development both cost-effective and uncomplicated, and the end-user’s experience seamless and secure.

These updates include the release of the OCF Universal Cloud Interface (UCI), IoT security baseline mapping and the new Simple Secure Multicast (SSM) feature. To help OCF members and the industry better understand these technological advancements, OCF experts have developed educational white papers on each topic. These white papers offer deep dives and unique insights into how and why these advancements have been made. Below we provide an overview of the new topical white papers now available for download:

OCF is proud to announce that one of the first OCF Universal Cloud Interface (UCI) platforms has been certified through the OCF Cloud-to-Cloud (C2C) Certification Program.

This announcement comes after the recently released OCF 2.2.0 specification, first announced in July, which included the OCF UCI and newly available C2C Certification program. One month following this announcement, OCF member company Haier Group certified its Haier Cloud. Leveraging the OCF UCI, the Haier Cloud can now communicate with other OCF UCI-Certified clouds, regardless of vendor. By achieving this significant milestone, Haier hopes to enhance its end user experienced by providing exceptional smart home services with ease of use.

Register for the Upcoming OCF Webinar: Smart Homes and the New Normal 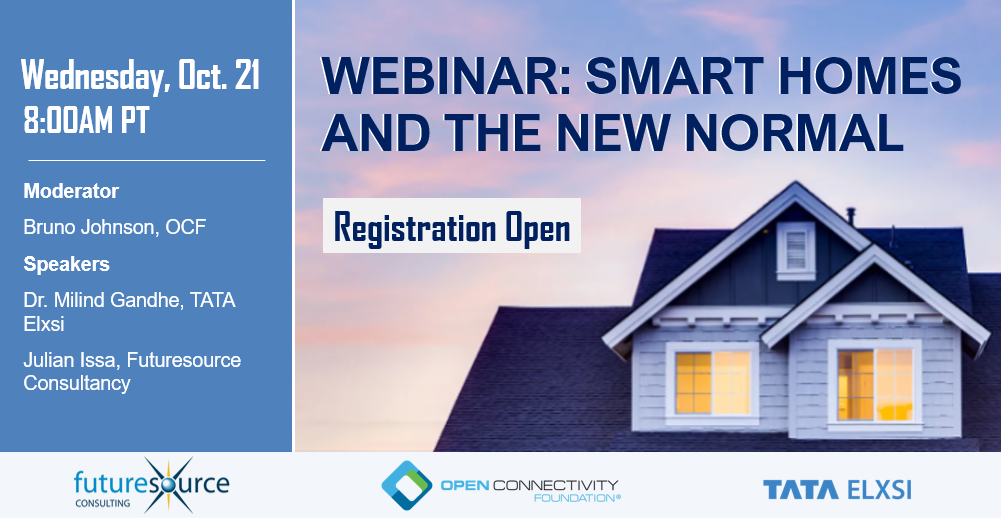 OCF invites you to the “Smart Homes and the New Normal” webinar event on October 21 at 8:00AM PT.  The webinar will cover smart home market insights in a COVID-19 world and how the OCF Core Framework and IoTivity open source solution provide the necessary security and interoperability capabilities for today’s smart home implementations.

According to Statista, consumer electronics will account for 63% of all installed IoT units in 2020. As millions of people are now confined to their living spaces, the use of smart home devices and appliances has dramatically increased, with individuals engaging in remote learning, work and digital entertainment. Security remains a top concern, as a UK University of Warwick study found that consumers are not convinced they can trust the privacy and security of these technologies. To alleviate these concerns, businesses and policy makers must show proof of cybersecurity measures to increase customer trust. In addition, with the expansion of work-from-home environments, businesses are now at risk with vulnerable employee devices in which little effort has been made to protect them at both the hardware and software level.

As OCF’s Chair of Cloud Technology, I am passionate about solving the critical issues that the IoT cloud-to-cloud communications face today, as well as addressing the absence of IoT interoperability. Today, cloud communications suffer from vendor lock-in and customers have trouble plugging non-interoperable IoT devices into different IoT platforms. It is nearly impossible to develop an IoT application that is cross-platform, and/or cross-domain. These issues are important to solve, as they ultimately prevent the emergence of IoT technology at scale.

OCF sees the massive potential for the IoT but recognizes that the market is fragmented. Discussions and collaboration among OCF members allow for a better understanding of how various IoT manufacturers and vendors operate. These discussions help guide OCF strategies, which are developed to mend the fragmented market and create a fully interoperable IoT. McKinsey Global Institute’s Internet of Things: Mapping the Value Beyond the Hype report points out the substantial connection between interoperability and the IoT’s predicted economic value. Particularly, the authors state that 40% of the market potential can be obtained with interoperability among IoT systems. Even though the value of interoperability is clear, it remains on a side-track, with more focus on proprietary vendor lock-in solutions. The IoT industry must shift its focus and realize the value of interconnecting devices and resulting economic gain. When assessing value, it is the number of connections that devices create, rather than the number of devices themselves.

Officially launched in July 2020, the OCF Universal Cloud Interface (UCI) standardizes connectivity between different manufacturer’s cloud servers and between devices and the cloud. To promote the OCF UCI and the ability to enable interoperability among cloud vendors, Kistler Group participated in the Bosch Connected World Hackathon (BCX2020) in February 2020. There, we were able to speak to different companies about OCF’s work and discuss the struggles that developers face. We found that most developers struggled with different data models, as well as obtaining and understanding the data. Making two different IoT solutions interoperable is not an easy thing to do. It’s not only about bridging the protocols, but also about the interoperability of the data model. Luckily, with OCF technology, even if the device comes from a different IoT Solution, we can map it to the standardized model that OCF defines.

Following the success of this OCF C2C demonstration, Kistler Group continues to be an active OCF contributor and developer of the plgd cloud technology. I encourage developers to read the OCF Cloud specification and give it a try. It is both easy to implement and use. This technology will help ensure that you can communicate between your system with member IoT Devices over their cloud. In addition to OCF UCI, we have launched plgd, an open source OCF cloud reference implementation. This open source solution provides a complete set of tools and services so you can manage your devices at scale in a cloud native way. It is secure from the start, with end-to-end security built in. Developers can access the plgd open source solution on Github to begin taking advantage of OCF UCI today.

For more details on OCF UCI technology, read our previous OCF blog, which describes today’s cloud landscape and how OCF UCI solves the roadblocks to cloud Interoperability, security and partnerships.